Walter Seward started business in Petersfield, Hampshire, England. He decided to set-up his company after the end of an unsuccessful partnership with local man George Ewen, who went on to start his own company.

The premises for the firm were a large workshop in Chapel Street, Petersfield. In later years, next to the workshop and yard, stood a three storey house Walter Seward had had built for his family to live in.

Petersfield once had only one museum; it was a museum of steam traction beginning in 1886. In the old buildings, one could see the engines and trace the history of a firm typical of many that were born with the introduction of steam power to agriculture. The exhibits had once been in everyday use by the very people who, until a fateful day in 1969, lovingly cared for them, and though the engines and other items are now dispersed, their story is well worth setting down for all to read.

This is the history of the engineering and haulage firm “W. Seward & Son of Petersfield”, founded by Walter Seward in 1886 in the small English market town of Petersfield, Hampshire. Most of what you will read is as it was told by the last remaining member of the original Seward family to have worked steam engines commercially, Bob Seward. He spent time with Kevin Lockyer and between them they wrote the articles from which the majority of this information has come. Sadly Bob died before seeing the original articles in print. They were published in 1984 and were dedicated to Bob by Kevin.

This web site is dedicated to all the Sewards and all the workers of W.Seward & Son of Petersfield.

Walter purchased his first engine in September 1886 from Marshalls of Gainsborough, Lincolnshire. Works number 14242. At the same time as buying this engine he also bought a 54 inch threshing drum and elevator.

The venture proved so successful that Walter placed an order with Marshalls four years later for another general purpose engine and drum. Works number 17821.

Although Walter was more than pleased with his Marshalls, he wanted a compound engine, as he had heard of their power and economy. In 1895 he took delivery of a 6hp Fowler compound agricultural number 7453.

Steam Rolling was added to the Business with the acquisition of a 10 ton Wallis and Steevens single cylinder roller 2377.

Another Wallis and Steevens 10 ton roller was acquired in 1900. This engine was purchased second hand from Wallis’ and dated from 1891. It was works number 2183.

In 1903 Sewards were engaged in a contract to cart building materials to Longmoor, Hampshire, as a large Army camp was being built there. Several of the Seward traction engines were being used for this task and as threshing season was just beginning Walter decided to purchase a new McLaren road locomotive number 726 to complete the job.

The rolling side of the business was by now doing well and the need arose for another machine, so Walter placed yet another order with Wallis and Steevens. This time he took delivery of a 10 ton compound roller with overhead valves. It was number 2819.

A possible opening for road haulage in the area was seen by Walter in 1907, so following some investigation he bought a second hand Wallis and Steevens 3 ton tractor number 2667, which was then 5 years old.

Jim Seward, Walter’s son, went to the Guildford show to look around the stands of the various traction engine manufacturers. Burrells were so represented, and one engine on display was a three speed 6hp double crank compound road locomotive. Jim immediately fell in love with this magnificent engine, and when he reached home later that day all he could talk about was the Burrell, and how fine she was. Walter finally agreed to buy engine number 3211. In addition to this Sewards also purchased a Wallis and Steevens ‘Oilbath’ tractor number 7258.

Walter Seward was so pleased with his first Oilbath tractor, Wallis and Steevens 7258, that he placed another order for an identical engine numbered 7393.

In the next few years, most of Seward’s work came from the Government to aid the war effort, indeed the Wallis and Steevens 7258 was requisitioned for the duration by the War Department. It was about this time that Walter Seward saw at work a 5 ton Foden belonging to a local brewery and was very impressed by it, so he immediately placed an order with Wallis and Steevens for one of their patent 5 ton steam wagons. As Wallis’ were also engaged in the production of vital war materials, the wagon had to be completed in their spare time, and it took a long time to finish. The engine was number 7586.

The Seward family were very friendly with a local showman by the name of Nelson Noyce, and when he decided in 1919 to buy a steam engine to pull his loads, it was Sewards who helped him. Noyce bought two former War Department Fowler three cylinder tractors (which by then had had their third cylinder removed) from John Gale of Winchester. Both engines were in a pretty bad way, so Sewards were instructed to build one good engine from the two. Most of the bits – boiler, tender, etc. – were from 11799, however the gearing and belly tanks were from the other one as 11799 had large long range pannier tanks. A dynamo bracket was added, as was a long cab, and she was then ready to start work. After a while it was found that the face of the flywheel was too narrow for belt work, so Bob Seward and Jim Noyce took it across to Wallis and Steevens at Basingstoke where a wider band was shrunk on. Bob recalled that while they were there, they were given a free dinner of roast beef and veg. Jim Noyce covered his with what he thought to be salt, but was in fact sugar, and subsequently was unable to eat it!

With the increase of petrol engined lorries on the roads, being sold off as Government surplus, steamers were being slowly pushed to one side, and one day Walter saw an ex-Army Thornycroft delivering flour to a local bakery. Being a far sighted man, he could see that steam did not have long to last. He wanted the firm to change to dealing with both internal combustion and steam engines, thus becoming more of a general engineering company. His son Jim was a staunch steam man, and it was his opinion that steam power was there to stay. Unfortunately, Walter Seward died in 1921, and the company did not make a change with the times. This was their first mistake of 45 years of business.

In the 1920’s, threshing was still the backbone of Seward’s business, and the Fowler 7453 covered the area between Hindhead, Liss, Hawkley. The three shaft Marshall 14242 worked the local Petersfield farms, and the four shaft Marshall’s (engine 17821) area was East and West Meon and the surrounding farms.

The late 1920’s saw Sewards make the decision to stop contract threshing, as it no longer paid. Much of the equipment was then sold. One of the threshing drums went to a farmer in Harting, so Bob Sewards with George Colewell steering, drove the Marshall 17821 to deliver the drum.

The four shaft Marshall 17821 was sold shortly after to A.J. Glue of Harting.

The year 1926 saw the arrival of Sewards last engine and also the beginning of the end for the company. Fowler 9393 was this engine.

By the mid 1920’s steam power was in decline and petrol was reigning supreme. The Wallis wagon 7586 was the first to go, then the Marshall 17821. Then the tractors were sold; firstly “THE KING” Wallis and Steevens 7258 to Steadham Sawmills near Midhurst in Sussex, and then “THE QUEEN” Wallis and Steevens 7393 to H. Symmonds, a Southampton showman. This only left the Marshall 14242 and ‘the little Fowler’ as the compound traction 7453 was always known. Jim Seward had a soft spot for these two, so when they retired in 1933, they were driven into the workshops under cover.

The firm still undertook work for other people who owned engines in the area, especially Walls, the local showmen – who nearly always had something in the shops. When Jim Noyce bought his set of gallopers, Sewards took the steam centre engine out, and replaced it with an electric motor. They kept the Savage centre, 722 “LITTLE JIM”, which joined the two tractions in the engine sheds.

Jim Noyce replaced Fowler 9393 with a Tilling-Steevens bus and the steamer was put aside. In 1943 it was towed home to the workshops in Chapel Street, to be later joined by “THE VICTORY”, the final exhibit in James Seward’s museum of steam power.

For a decade the five engines stayed together. “THE VICTORY” was the first to leave when the late Bill Druce bought her from Jim Noyce in 1954, but the other four remained for many more years, being polished, oiled and greased with affection by their owner.

People came from all over the world to see them, and no one was allowed to leave without signing the visitors book (sections of which are shown below). One American family was so impressed with the collection, that they went back to the USA to get some friends, who they brought back to see the engines. 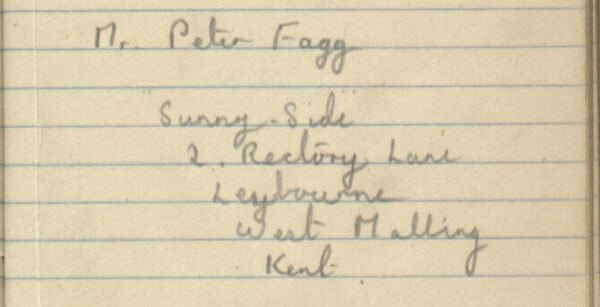 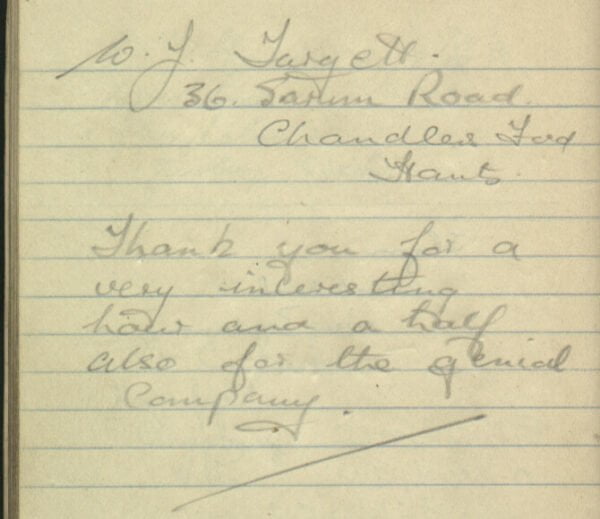 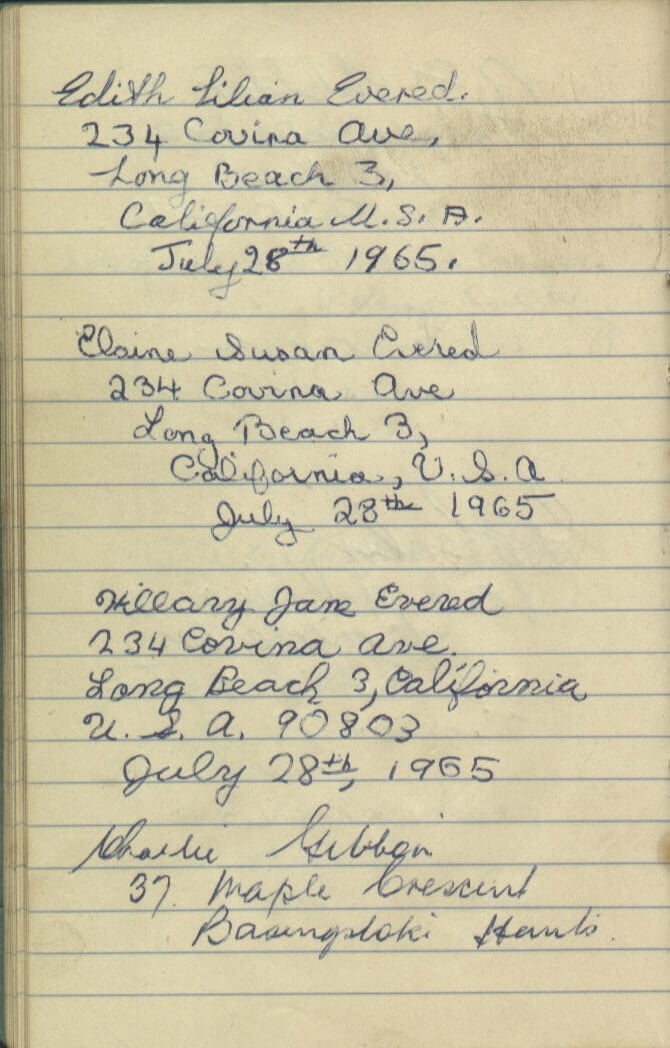 Sadly, Jim Seward died in 1969 at the age of 91. Due to a mix up in his will, everything had to be sold and the workshops were then demolished, together with the house that Walter had built all those years ago, to make way for the entrance to a car park! The Marshall 14242 was the first to be sold, then ‘the little Fowler’, 7453, followed by “SIR JOHN FOWLER” number 9393, and finally the Savage centre engine.

Petersfield’s only museum, at the time, and 84 years of history had gone.