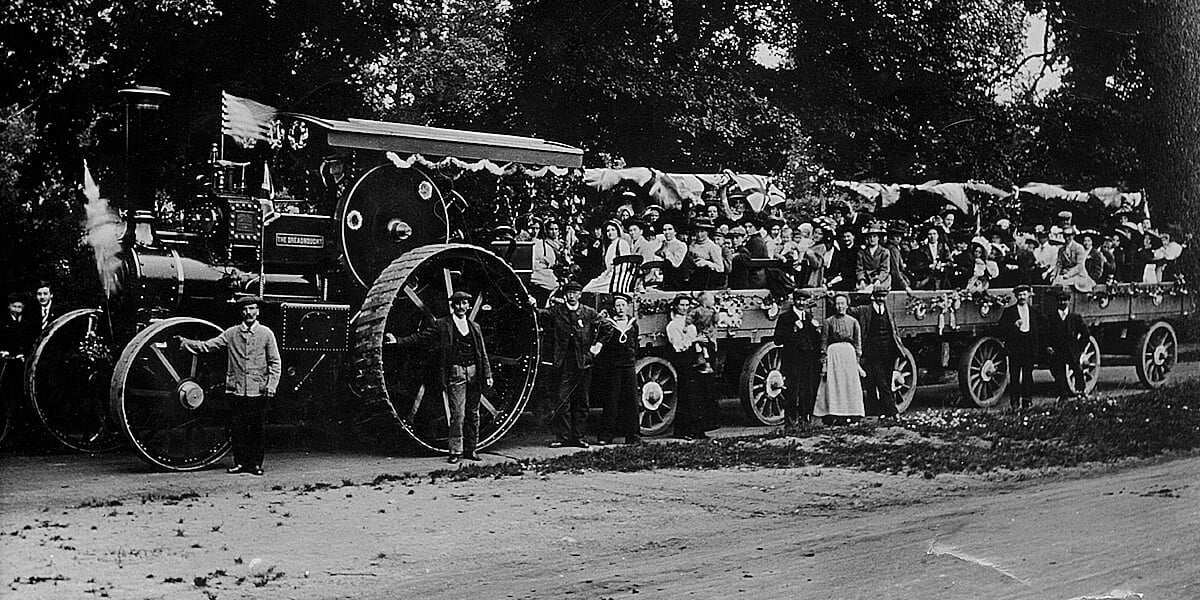 This splendid scene was posed in Station Road, Petersfield in 1912 and shows some 149 Conservative Party members (mostly ladies and children, so possibly the gentlemen walked!) on their way to Basing Park at the invitation of Squire Nicholson, their local Member of Parliament for many years. The wagons were all made by W. Tasker of Andover.

After visiting the 1911 Guildford show, Jim Seward, Walter’s son, had fallen in love with a magnificent Burrell three speed, 6hp double crank compound road locomotive. Upon his return home all he could talk about was the Burrell and how fine she was. Walter finally agreed to buy the engine, and it was delivered by rail a week or so later (there was another engine purchased in this year, a 4hp Wallis and Steevens ‘Oilbath’ tractor number 7258, “KING OF THE ROAD”). At Petersfield goods yard the chimney was put back onto the smokebox, for that item and the half cab had been removed for rail travel. Steam was raised, and the engine then driven to Seward’s field in Tilmore Road, Petersfield, with the cab following in the L&SW Railway’s delivery cart! Numbered 3211 and carrying the name THE DREADNOUGHT the engine looked resplendent in its dark green paintwork.

The new arrival was mainly engaged on furniture haulage work in the area and one particular job was to move a farmer and his family from Eastbourne to Worthing. The engine set off for Eastbourne pulling two empty pantechnicons and an open wagon, reaching its destination the next day. The farmer’s furniture was loaded into the pantechnicons and the farm tools and implements into the wagon. Everything was transferred to Worthing and unloaded without incident. Jim Seward was driving on this occasion, and before departing for home looked around Worthing for a load to haul back to Petersfield instead of just returning empty. Not finding business he had to return regardless. On the way home they were caught in a tremendous thunderstorm, and lightning struck the engine. A blue electric flash was seen to run along the regulator rod from the handle to the block until eventually going to earth, lighting the cab of the engine with a weird blue glow. When they eventually arrived back in the yard, Jim got down from the engine just as the telephone started to ring. He rushed inside to discover it was someone in Worthing wanting a load of furniture to be carried to Petersfield! The next day one of the tractors (there were two by this time) was dispatched with a pantechnicon for Worthing.

The only trouble that Sewards ever had with THE DREADNOUGHT was not long after they bought it; a leak developed from under the cylinder block, and got steadily worse. As she was still under guarantee, Sewards called Burrells in to fix it. Several men came from Thetford. They removed the motion and cylinder block to replace the gasket, reassembled, test steamed, and when all was found to be steam tight, left, having done a good job. Later that year Jim Seward lengthened the canopy by a foot or so to give added protection to the motion, otherwise the engine remained unaltered until the day it was sold.

An unusual contract undertaken by Sewards was the demolition of Castle House in Petersfield Square. This was a large 16th century manor house, and was knocked down to enable a new post office to be built on the site. THE DREADNOUGHT was selected for the job and was driven into the centre of the square in front of the fated building. After being well chocked, the wire rope was run out, and with several extension pieces, encircled the house. The pull began. Slowly the rope cut through the ancient brickwork like a cheese wire and the house collapsed onto itself. After several more pulls, all that was left was a large pile of dusty masonry. This was in 1913, but it was not until nine years later that the post office opened for business, indeed more or less as it appears today.

During World War I THE DREADNOUGHT mainly worked on Government contracts, hauling three trailer loads of dirty blankets from Southampton docks, returned from the trenches in France, to the Petersfield Electric Laundry. Clean ones would be taken back to Southampton for shipping out again on their return journey, and so the job would go on. The Burrell was one day approaching the laundry with her usual three loads behind, and being driven by Jim Seward, when suddenly the engine lurched to one side. One of the rear wheels had broken through a man-hole cover, so accompanied by the sound of sharp barks from the chimney, Jim threw the regulator wide open and then just as quickly, once THE DREADNOUGHT had pulled herself free, snapped it shut so that the leading trailer would not follow a similar course. After considerable shunting, the engine and loads avoided the hole and arrived safely at the laundry only a matter of a few hundred yards along the road.

In about 1916 the Army wanted to requisition the road locomotive for war service. Sewards knew very well that they would not get her back in the good condition she was then in, so decided to hide her, perhaps until the war was over. Apart from the yard and workshops in Chapel Street, Walter owned a large field in Tilmore, Petersfield, and THE DREADNOUGHT was driven to the middle, and, after being well greased, a large hay rick was built around the engine, hiding it completely! Here she stayed for a number of months, undiscovered, but eventually the authorities became aware, and once again wanted the machine. However, Walter sold her to J. Gale, a haulage contractor of Winchester, who paid £1,000 for her. After several other subsequent owners, she returned to Petersfield with Walls Brothers, locally well known showmen, who fitted a long canopy and dynamo bracket. The brothers did not like her much whenever she worked hard at generating, the barks from her exhaust could be heard miles away. THE DREADNOUGHT was finally cut up by Hardwicks in 1948.