Home
|
The Steam Engines
|
Wallis and Steevens 7258, King of the Road 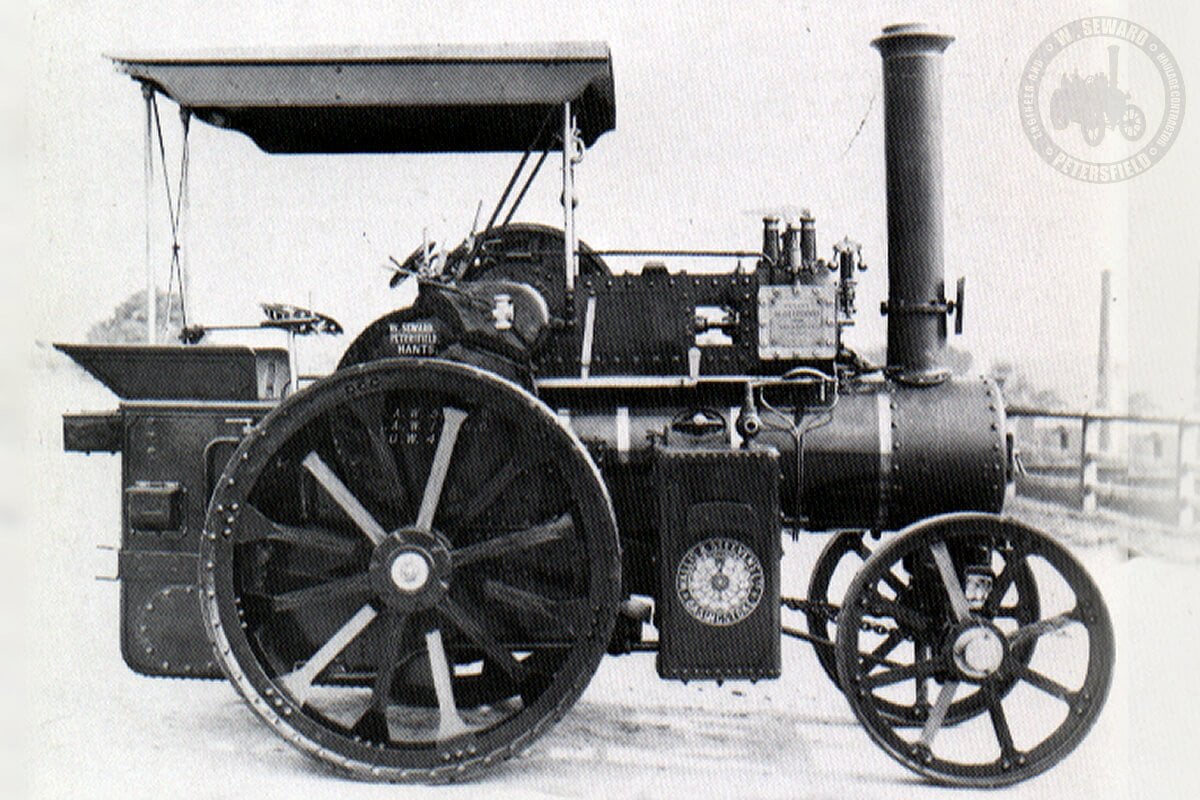 Wallis and Steevens 7258, King of the Road

Wallis and Steevens 7258, “KING OF THE ROAD” shown here at Wallis’s factory prior to delivery.

Wallis and Steevens 7258, King of the Road

1911 also saw the arrival of Wallis and Steevens 4hp ‘Oilbath’ tractor number 7258 (the other engine purchased in this year was Burrell 3211 “THE DREADNOUGHT”). The engine was fitted with compound cylinders, a half length cab, side tanks, and had all copper pipework. The engine was named “KING OF THE ROAD”, but this was soon shortened by all to “THE KING”. It was bought by part-exchanging the old 1903 McLaren road locomotive, number 726.

Several modifications were carried out on “THE KING” which included shortening the side tanks by 18 inches so that they did not ground when the engine was working off the road, and enlarging the access holes in the side of the oil bath casing to make gland repacking easier.

As far as Sewards were concerned, the little engine was a credit to her makers, and a better steam tractor did not exist. She had ample power for her size and ‘steamed like the best of them’. Her two regular drivers, Bob Seward (Jim’s youngest son) and Bill Fiander, had no compliants at all. It was “THE KING” that went to move furniture from Worthing after the return of the Burrell road loco mentioned on its own page, the link for which is above.

Out of all the engines in the Seward fleet, the tractors must have been the hardest worked, hauling anything from furniture to fairground rides for the local showmen. A regular journey they made once or twice a week was to London and back a distance of 110 miles or more. “THE KING”, driven by Bob Seward, would leave the yard about 4am with a pantechnicon full of furniture, and journey up to London, reaching there at about 9:45am. After unloading the furniture, they would pick up a load of provisions for the shops in Petersfield and then steam home, usually arriving back about midnight. Quite often Bob would be delayed whilst driving up Oxford Street by a large flock of sheep being herded in the same direction!

One particular contract which Sewards undertook was carting stone from the rock pit in Liss to Durford Wood, about two miles away, where several houses were being built. The stone was for the foundations of the driveways leading from the main road. To get to Durford Wood from Liss meant ascending a very steep winding road called East Hill. Bob Seward was driving “THE KING” pulling a trailer load of five or six tons of stone on one occasion, when about to start the long climb, he was flagged down by the driver of a Model A Ford lorry loaded with gravel, who explained that he was carting the gravel for the surface of the drives, and his lorry was not powerful enough to climb the hill fully loaded. Could Bob tow him up behind the trailer? After payment by several packets of cigarettes, Bob agreed and tied the Ford on behind and steamed off up the hill, untying at the top to carry on. This was done several times that day, and in the early evening Bob returned to the yard to find his father waiting for him. “Have you been helping a bloke up East Hill in a Ford truck?” he asked. “Yes,” replied Bob “what’s wrong with that?” “Well, we were after that contract hauling gravel, but the so and so undercut us. You’ve been helping the opposition!” Needless to say, the Ford had to make its own way up to Durford Wood after that!

There were some unusual jobs that Bob did with “THE KING”; one was carting chalk from Butser lime works, just outside Petersfield, to Haslemere, a distance of fifteen miles or so. Here it was laid out in a field in fourteen foot letters spelling HASLEMERE to enable aircraft to navigate by it. On one of the trips, the pressure gauge broke, so Bob had to come home ‘blind’. Another unusual contract was with the local police. Just on the outskirts of Petersfield is a very steep hill with a road winding up its side to the top. Sewards were often called out to pull cars from over the side of Stoner hill, as it was then very easy to inadvertently drive over the edge. The winch rope would be run out and connected to an extension piece and the wrecked car would then be dragged back to the top and taken into Petersfield.

In the next few years, most of Seward’s work came from the Government to aid the war effort, “THE KING” was requisitioned for the duration by the War Department.

In the mid 1920’s steam was in decline and “THE KING” was sold to Steadham Sawmills near Midhurst in Sussex. It was repaint by Jim Noyce before it was sold. Bob didn’t see the going of “THE KING”, which he had driven for so many years, and he was quite sad to find her gone when he came home from a job one evening.