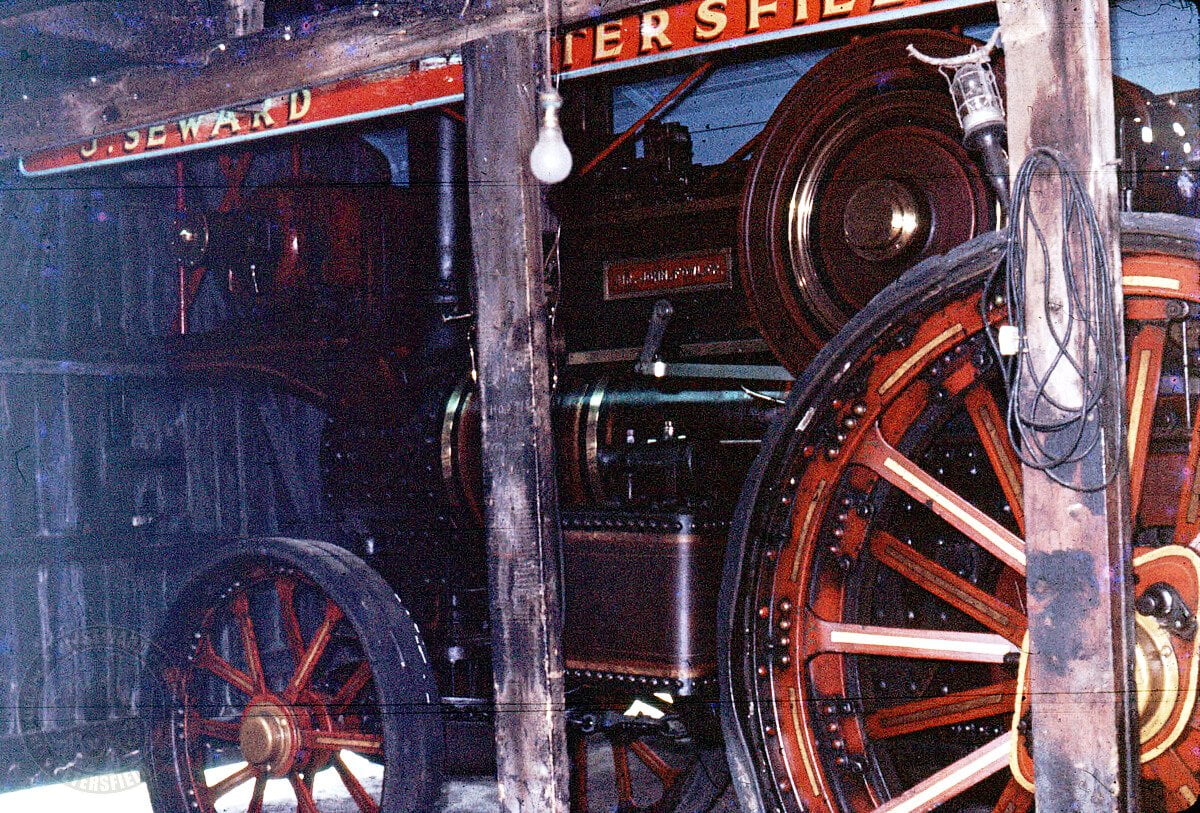 Fowler showmans road locomotive 9393 of 1905, named “SIR JOHN FOWLER”, was originally built as a 6nhp class R1 road locomotive. The engine was sold new on the 14th March 1905 to Lalonde Bros. & Barham of Weston-super-Mare, Somerset – well known long-distance furniture removers. In 1921 she received the Somerset registration number YA 44. The engine passed into the ownership of Gilbert Anderton and Betty Haslam during 1921 and, converted for showland use, was used by Anderton and Rowland of Bristol – but without the familiar twisted brass roof supports. Not often used and subsequently laid up, Anderton and Rowland offered her for sale in 1926, and this news traveled around the fairgrounds amongst showmen until it reached the Noyce family of Petersfield, Hampshire.

Nelson Noyce and his sons Jim and Tom had one engine named “THE VICTORY” which took its name from the Wallis and Steevens engine 7586, a 5 ton wagon, Sewards had had delivered in July 1919, and subsequently sold to a local brickworks in 1923, removing the name plate beforehand. Although “THE VICTORY” was a very good steamer, she was only 5hp and Jim Noyce wanted a larger engine to haul his loads. He was therefore, very interested in “SIR JOHN FOWLER” and he approached his great friend James Seward, who had a fairly large steam engine business by this time. After lengthy discussions, Jim Seward agreed to buy the engine and let Jim Noyce use it. The cash sum of £200.00 was withdrawn from the bank and Jim, together with his brother Tom Noyce and Jim Seward, set off to Bristol to collect the Fowler.

The journey was uneventful until they reached a small village near Petersfield called Bramdean. By then it was dark and they pulled over to the roadside to enable a Foden wagon to pass. Unfortunately they went a bit too far and the engine started to list heavily as it began to slide into a ditch. Jim Noyce hurried back to Sewards and relayed what had happened. Luckily enough, the engine was fairly secure and was unlikely to fall over, so the recovery was left until the next day.

The following morning, the men, accompanied by the works engineer, George Colewell, and equipped with jacks and timber, set off in their Morris lorry to extricate “SIR JOHN FOWLER” from the ditch. She was slowly jacked up and packed with timber until level enough to be driven away. When at last at her new home in Petersfield, she was driven into Sewards workshop to be inspected more closely. It was discovered that a small amount of work was needed to be done on her before she could be worked hard. For a start a 10 inch square patch needed to be welded in at one place in the fire box. As Sewards had no welding equipment, Fodens of Sandbach, who had a workshop at Waterlooville (a few miles south of Petersfield), were hired to come and fix the patch in place. Other repairs included new tubes, new slide valves and a plate welded into the rear of the tender. Sewards also changed the injector feed from the side of the fire box to the boiler barrel. The dynamo was overhauled and taken to Reading to have new segments fitted to the commutator. The Noyce family re-painted the engine in crimson lake, including the wheels, with gold lines, and then, looking resplendent in the new paintwork, the engine was ready to start her working life on the fairgrounds of Hampshire.

The first fair that “SIR JOHN FOWLER” attended with the Noyce family was in the spring of 1927, at Portsdown Hill, near Portsmouth, Hampshire. She arrived there from Petersfield, pulling Jim’s shooting gallery loads, a living van and a water cart. Her job would be to generate electricity for lighting and powering the shooter. The next few years were pretty uneventful with the exception of one occasion when Jim Noyce over-worked SIR JOHN, and reduced the dynamo to a ball of flame. A replacement dynamo was quickly found, and Sewards went to Southampton to pick it up.

In 1931 Noyce’s were to appear at Wickham’s street fair, but unfortunately as they were coupling up the loads, Jim’s arm was caught by a draw bar and the flesh was removed right down to the bone. As he was unable to drive due to his injury, Jim Seward senior took over, driving the fair during the day and in the evening, his son Bob Seward took over, driving the lights. Everything went all right that evening until Jim Noyce came up to see how Bob was doing. “She seems to be working very hard; I always seem to be putting coal in!” said Bob, “Right” replied Jim, “I know what’s happening – when I wave, shut her off!” Bob did as he was told and shut off SIR JOHN on Jim’s signal. To everyone’s surprise, nearly all the lights on the sideshows went out! It turned out that the power lines had been tapped and the Fowler was powering most of the lights in the fair.

Later the same year, “SIR JOHN FOWLER” was on route from another Porchester fair to Worthing along what used to be known as the Coast Road, when Jim Seward, who was still driving her for Mr Noyce, decided top stop for water from a nearby stream. The hose was laid out and the replenishment of the tanks was begun. Jim built up the fire to keep a good head of steam, but when they tried to turn the water lift off, nothing happened! The water was gushing form the tanks and the steam pressure was rapidly increasing. The washer on the lift tap had worn away so that it could not shut off. For a while after, the air was blue with every swear word and curse the men could think of raining down upon the unfortunate engine. The fire had to raked out and the men had to wait for the pressure to lessen before attempting to fix the tap; a lot of time was wasted that day. When SIR JOHN was next in the workshop, Jim Seward put another tap higher up on the lifting pipe so that it would not happen again.

The engine regularly attended the annual Taro fair at Petersfield with Noyce’s shooter and one year she attended Petersfield Carnival. She drove down to the site towing her stable mate “THE VICTORY” who was also in steam, but was not licensed for the road. It is interesting to note here that the Fowler tractor was a very good engine on soft ground and rarely got stuck, so whenever she arrived on the fairground, all the other showmen wanted her help building up, as their bigger engines were too heavy.

Jim Noyce worked SIR JOHN continuously until he bought a Tilling Steevens petrol-electric bus to replace her. The engine was then laid up in Seward’s sand pit in 1941. She had now begun to show her age and one tube had gone and was blanked off. Later, during the war, with petrol becoming increasingly harder to obtain, Jim Noyce decided to use the steamer again and fired her up. Just as he was ready to pull out, several more tubes started to leak, so she was left. It was the end of her working life.

Shortly before the end of the war, Sewards decided to put her in their workshop instead of just letting her rust away, so she was towed from the sand pit into the workshop in Chapel Street, Petersfield, by George Ewen’s 7hp Wallis and Steevens traction engine, 7985 of 1919.

“SIR JOHN FOWLER” stood in the workshop along with Fowler 6hp compound, 7453, Marshall 6hp 14242 and Savage centre engine 722 of 1900. SIR JOHN and her companions were lovingly cared for by their owner and driver Jim Seward senior, until his death at the age of 91 in1969. Several months later all four were sold into preservation.

Photos taken of Sir John Fowler in the Sewards workshop