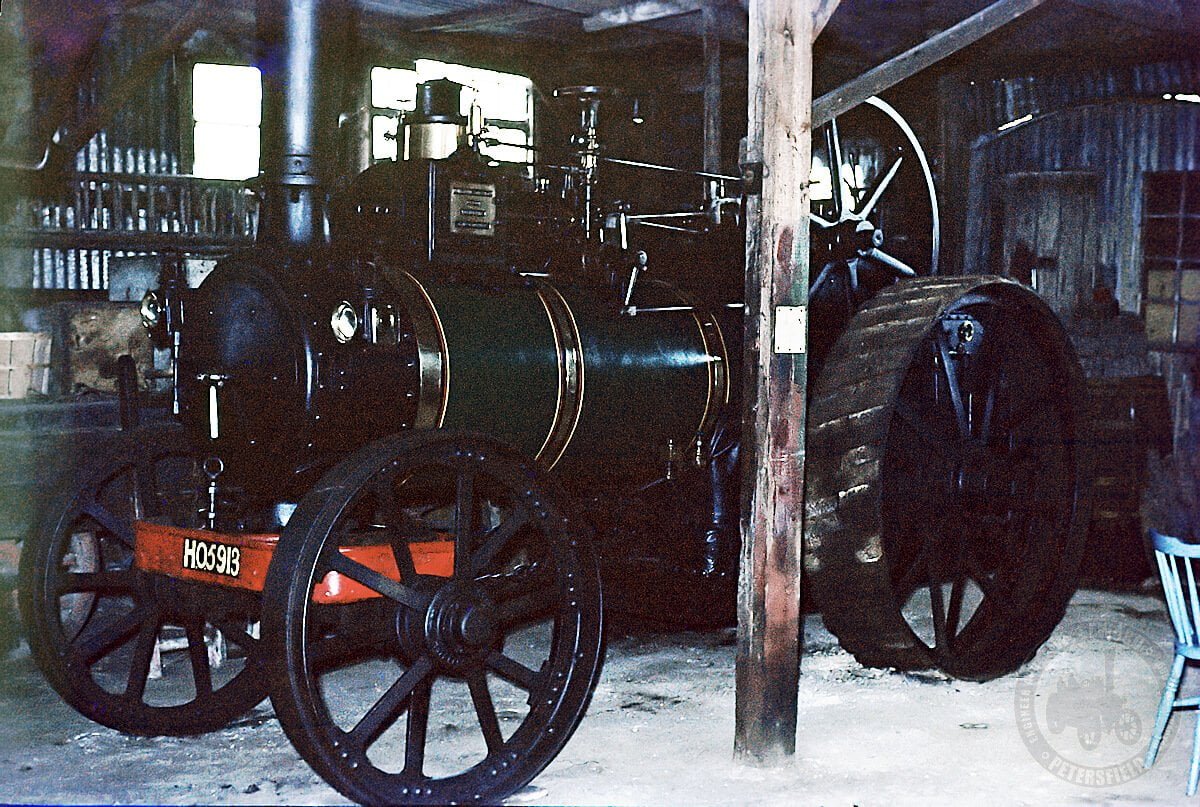 Walter purchased his first traction engine for the business, brand new on 15th September 1886 from Marshalls of Gainsborough, Lincolnshire. This engine was, and still is, a 6nhp, single cylinder, agricultural. It is the oldest known Marshall Traction Engine in preservation today and carries the works number 14242.

At the time of ordering the engine from Marshalls they were still building engines with the perch bracket for the front wheels mounted under the front of the boiler. Walter specified that he would like the engine to be built with the perch bracket mount beneath the smoke box. Initially Marshalls were not prepared to do this as they ascertained that the smoke box would not be able to withstand the weight, and it would more than likely collapse. After a long debate Marshalls agreed to conform to Walters request but specified that they would not take responsibility for any incidents that may occur as a result of the design. 14242 then went on to serve for nearly fifty years with no problems and never missed a days work. After this ALL Marshall traction engines were built to this design.

As part of the purchase Walter also bought a 54″ threshing drum and elevator. Making this the first threshing set to enter the company.

Between 1886 and 1889 Walter added a brass band around the top of the cylinder block, which is still there to this day having been preserved by Peter Fagg who restored the engine during 1980. Also added by Sewards was a lagged firebox and the injector clackbox. The lagged firebox was fitted to try to convince local farmers that the fuel they were supplying was not going to waste when threshing!

During the 1920’s, threshing was still the backbone of Seward’s business, and the Marshal 14242 worked the local Petersfield farms.

14242 was retired in 1933 and spent the years until 1969 being polished, oiled and greased with affection by her owner.

She was sold in 1969 when James Seward died at the age of 91, and left the family. Firstly, in 1970, she went to Bob Ansell of Wisborough Green, West Sussex. The event of her leaving Petersfield was record in the Hampshire Telegraph newspaper. Shortly after that she was sold to Jonathan Minns.

On the 24th October 1980, Peter Fagg bought her from Jonathan Minns and started to restored her to her former beauty. He gave her the name “Victoria, Empress of India” a very fitting name for this grand old lady.

During her restoration by Peter, he kept notes in a small notebook, which makes interesting reading today:

Steering Gear
Near side bracket bearing trues up by grinding.
Chain drum turned down to receive sleeve for near side bearing.
Drum cleaned up by turning .020″ off.
New key to pinion.
New key to worm.
Stearing chains anealled.
New pins and cotters in front axle.

New smoke box in 8mm plate as 1/4″ plate is no longer available.

Getting to know Victoria

Victoria was kept at the British Engineerium in Hove and for many years and had a stable mate in the shape of “Albert” the Fowler 7453 which was owned by the Engineerium at the time.

In 1996 “Victoria” and “Albert” came to Petersfield for a celebration of their return to the town and to attend the Downs Rally. It was on this day that Lloyd Wakelin (great, great grandson of Walter Seward) first met Peter and Shirley Fagg, when he had to go up to the rally field at Froxfield after coming home from work to collect his wife Wendy. She had managed to blag a ride in the living van behind Victoria from the Market Square in Petersfield up “Stoner Hill”, also known as Little Switzerland, to the rally.

Lloyd and Wendy stayed in contact with Peter, Shirley and Neil Gough from this point onwards, and whenever possible, visited rallies to see them and Victoria.

Sadly however after 22 years of loving and cherishing, “Victoria, Empress of India”, Peter decided the time had come to sell her.

A new era in the history of Sewards and Marshall 14242 was about to begin.

A new era for Victoria

At the Parham Park steam engine rally during June 2002, Victoria was visited by Lloyd Wakelin. There was nothing much unusual about this, as Lloyd had always tried to see the engine at rallies whenever possible. On this occasion however, Lloyd was curious to know what had happened to the Fowler 7453 which had recently been sold. Whilst walking around the show he bumped into Neil Gough, who was Peter Fagg’s helping hand with Victoria, who informed him that the Fowler had been sold to a family named Chapel in France. Neil went on to say that Peter may know more details, so Lloyd went over to Peter to ask the question.

Peter didn’t actually know how much “Albert” had been sold for but gave Lloyd a rough idea of the likely price, to which Lloyd replied “That’s a shame, I would have been interested in buying Albert, because its a Sewards engine”. Peter then ushered Lloyd away from the people around them and said, “Well its interesting you should say that, as I’ve been considering selling Victoria.” to which Lloyd replied “I would definitely be very interested in buying her, how much are you asking?” A price was mentioned and the negotiations started.

Over the next few weeks there were telephone conversations backwards and forwards until the final price was agreed. Peter then arranged for the relevant boiler inspections to be completed, including the 10 year hydraulic test. She past with flying colours, which was very impressive as she still has her original firebox and boiler.

On the 24th August 2002, Lloyd and his wife Wendy went to the British Engineerium to drive the engine for the first time. Peter showed them the ropes and it was a wonderful sunny day, steaming along the sea front at Hove and then down past the Shoreham power station to get a cup of tea at Carats Cafe. In the early evening they all returned to Peters house and went through the paper work and handed over the cheque. “Victoria, Empress of India”, had returned to the family after an absence of 33 years.

The following Saturday, Kevin Lockyer accompanied Lloyd down to Hove, to become acquainted with the engine.

The 12th September soon came. Victoria was steamed up and driven out of the Engineerium for the last time. The low-loader wasn’t the one that had been hoped for to pick her up, and there were a few discussions about how to load both Victoria and her living van. After much pacing backwards and forwards, measuring the height of the living van and the bed of the low-loader, it was finally decided to push the living van on backwards using Neil Gough’s Land Rover. This saw some hair raising moments as the van was edged slowly onto the trailer. After some very skillful driving by Neil the van was in place, perch up high. Peter Fagg and Neil Gough steamed Victoria up onto the trailer. It was then time for an emotional fair well from Peter and Shirley as the precious load drove away from Hove and headed back to Petersfield.

Upon arrival, in what’s locally known as the RAC lay by just south of Petersfield, it was time to unload. Kevin Lockyer and Lloyd helped release the fastenings that had held Victoria and the living van safe on the 50 mile or so journey. Kevin then built the fire back up and raised steam. After about 30 minutes it was time to reverse Victoria off pulling the living van at the same time. Kevin did this perfectly. Once unloaded, the finances were taken care of and then Victoria steamed back into Petersfield, to her temporary home at Wendy’s parents house in The Causeway.

The living van was pulled into the new home and it was at about this time both Lloyd and Kevin started to get to know Victoria a little more Intimately. Whilst trying to manoeuvre the van into place they needed to couple the front of Victoria to the draw bar of the van. This would have been fine except for the very uneven ground and no matter what they tried they couldn’t quite get everything to lined up. So, as a last ditch attempt to couple engine to van, Lloyd held up the draw bar while Kevin shunted Victoria forward…. Victoria’s right front wheel lurched over a mound, before Kevin could shut her off the draw bar of the van has knock from Lloyd’s hands and scrapped across the front axle of Victoria. This left Lloyd stood in a small triangular area with Victoria’s left front wheel behind him, the draw bar to his left and the smoke box door to his right. Kevin quickly reversed Victoria, and both him and Lloyd chose a few expletives when they saw the scratch. It was decided at this point to “stop p!$ing around and go and have some fun”. So Lloyd, Wendy and Kevin took Victoria down into the town centre and parked on the Market Square. This was a very proud moment, she really was home.

12 noon on Monday the 16th September 2002 saw the official beginning of the new era for Sewards of Petersfield. “Victoria, Empress of India” returned to The Square in Petersfield, 116 years after Marshall, Son & Co. started to build her.

The Square is only a few hundred yards from where the Seward’s workshop used to stand in Chapel Street. It is also a place Victoria would have steamed past many times during her working life, because of this it was a very emotional day for members of the Seward family, seeing her, polished and gleaming in the afternoon sunshine, stood in the middle of the town she knows so well.

One of the best surprises of the day was when Lloyd and Wendy Wakelin, the new owners, met Maisy Seward-Hobbs, the grand daughter of Walter Seward, then aged 94, who brought with her a picture of herself with Walter Seward, circa 1915.

Many people turned out to see Victoria and ask questions about her history and connections with the town. There were also those who knew of people who had worked for the Sewards.

The local newspapers took interviews with the proud owners and with those who had company connections. All this information will hopefully be documented and preserved as part of the history of Petersfield and the Sewards.