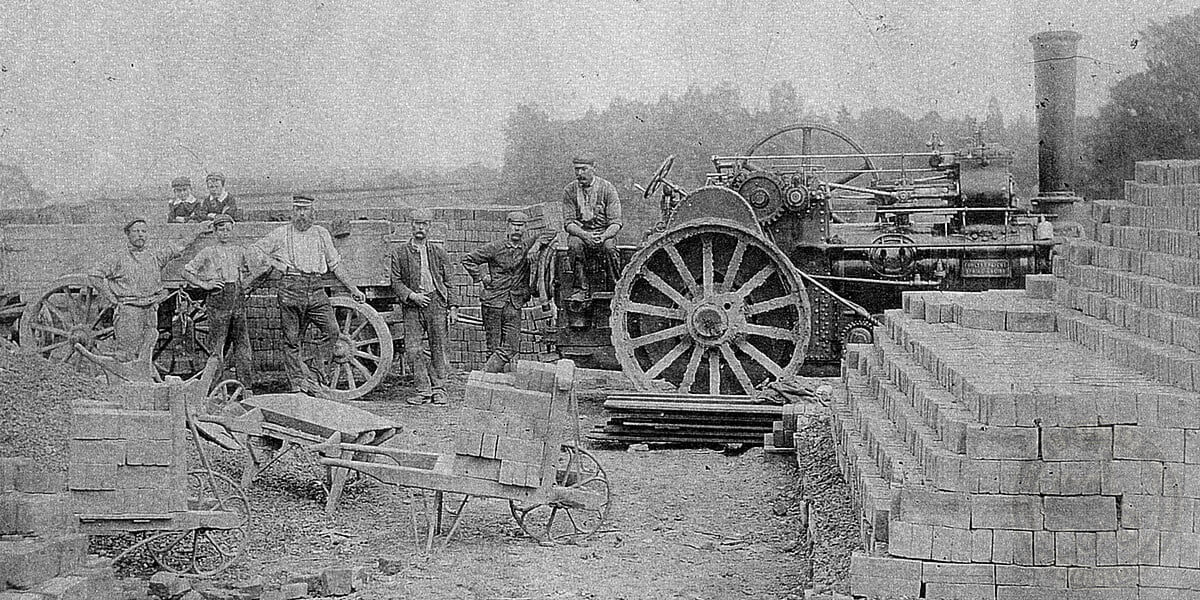 This is a picture of Fowler 7453 at Nightingales’ Brickworks, Petersfield, Hampshire. The photo was taken circa 1900 by either J P Blair or S P Blair who had a photography business in Petersfield.

Walter Seward took delivery of a 6hp Fowler compound agricultural number 7453 in 1895. When he ordered the engine, he specified it to be built as light as possible. This instruction was carried out and the engine was delivered by rail in November of 1895.

According to the records of John Fowler & Co. Leeds, the order for the engine was added to their Stock Order ledger on April 27th 1895. The brief entry states that the engine should be a “Class A4 Compound Agricultural Traction. Hind axle on springs. Brass cap on chimney. Horizontal regulator lever”. It also has an added note “Painted Green. As per sample sent.”

The notes for the actual build of the engine start from the date August 22nd 1895. Below are some of the interesting excerpts from the record.

After using the engine it was found that the Fowler was breaking wheel spokes at an alarming rate, and others were coming loose in the hub. Fowlers were informed and replacement rear wheels were dispatched, but the new items were of a smaller diameter than standard. To this day, the engine retains the very individual appearance given to it by these smaller rear wheels. On the notes from the Fowler works there is an entry for the replacement rear wheels, it reads, “July 9th/03 1 Pair of hind road wheels 5′ – 6″ dia x 1′ – 4″ wide. Bored 4 3/4″ without brake ring.”

The engine was economical and powerful, and used little water and coal compared with other engines. It was often used to pull a threshing drum, elevator and living van up a local hill called “Hawkley Hill” which it attacked successfully non-stop in top gear. This is a hill that is considered steep even today and has a sharp hairpin bend halfway up.

We even have photographic evidence of 7453 being used on haulage duties at the Nightingales Brickworks, The Causeway, Petersfield. A fascinating picture kindly given to us by Derek Leech.

During the 1920’s, threshing was still the backbone of Seward’s business, and the Fowler covered the area between Hindhead, Liss, Hawkley.

7453 was retired in 1933 and spent the years until 1969 being polished, oiled and greased with affection by her owner.